The American author Stephen King has written somewhere that an idea for a story is something you come across through happenstance, like an interesting pebble found on a beach. In the case of this book it was an article in the Spiegel magazine that I read soon after moving to Germany in the mid-1990s. The article was about a devilish scheme on the part of the East German intelligence service, involving something called the Lebensborn. As I soon found out, the Lebensborn was a chain of maternity and children’s homes, set up by Nazi SS on the orders of its leader Heinrich Himmler, initially for German unmarried mothers and wives of SS men, and later, during the Second World War, for women of the occupied countries who had become pregnant by German soldiers. Many of these women, to avoid the stigma involved, gave their infants away to the Lebensborn, where they would be looked after until an adoption could be arranged with a suitable German family.

After the war many of these children grew up in the Russian-occupied part of Germany, which became the German Democratic Republic (GDR), and the East German intelligence service, the Stasi, hit on the idea of using them as spies, since they had an automatic right to go to the country of their mothers and a credible reason for doing so. However, some of these individuals proved too unstable psychologically to be suitable for espionage work, so as an alternative the Stasi would sometimes get an agent to masquerade as an ex-Lebensborn child. The Spiegel article dealt with the case of a Norwegian woman who had given birth to a son by a German soldier and then given the infant away to the Lebensborn. Later she married and produced some more children. Decades after the war a young man turned up on the doorstep announcing himself as her son. She accepted him and her other children welcomed him as their long lost half-brother – a seemingly happy ending, but in fact the story went on to a tragic dénouement.

Fast forward to one afternoon on a visit to London when I was having tea with my old friend Tim Jeal, novelist and biographer (of David Livingstone, Baden-Powell and H. M. Stanley): I happened to mention the Spiegel story, and in flash we both realised that it would make a sensational novel. We discussed working together on it, and I promised to draft out a synopsis. I returned to Hamburg where I was living in St. Pauli, on the edge of the famous red-light district. I had a highly demanding job, so it was a year two before I got round to writing the synopsis. Tim was enthusiastic about my treatment, and we agreed to go ahead with the collaboration. I would do most of the donkey work, he would do fine-tuning and some of the writing, and we would develop the plot and characters as we went along. We would use the common pseudonym of Roy Havelland.

It was to prove a fascinating but arduous task, like sculpting with a piece of recalcitrant clay and having to crunch up one attempt after another and start all over again. Things were made more complicated by the fact that we went through three different agents during the course of the writing. With the first one we worked closely, following his detailed suggestions, and had just got the book to the point where we thought it was ready to offer to publishers, when he announced that he was no longer dealing with fiction and could not handle the book any more. It was then taken on by a very able woman who invested much time in making detailed comments and suggestions, but again fate intervened in the form of a family crisis that forced her to cease working as an agent. Eventually we found another woman agent who loved the book and submitted it to all the main publishers one by one … and drew a blank with all of them. The comment was nearly always the same: “Very good book, but we can’t make it work in the present market.” So in the end we published it with Vanadis Texts, an imprint that my wife Donate and I had set up using Amazon, and the readers loved it. But back to the writing of the book itself …

The spy character in our story is called Henrik Erdmann, a young Stasi man who knows nothing about his early childhood except that he is the war-child of a Danish mother and that he was given away to the Lebensborn. One day his bosses tell him that newly discovered records show that his mother is Birthe Karlsson, a farmer’s wife living on a island off the Baltic coast. He is to go to Denmark, ostensibly as a political dissident who has been released to the west under a secret ransom arrangement between the two Germanies. He is to make contact with his mother and settle down in Denmark to do espionage work for the Stasi, his first assignment being to sabotage a prominent Danish politician called Arnold Borup, who is opposed to détente with the Soviet bloc. On arrival in the West he settles initially in Hamburg as a temporary base.

So the bones of the story began to take shape. We decided to have a prelude in the Berlin of 1990 and then go into a flashback for the main story. The settings were based on places I knew. I chose Denmark rather than Norway, because the former was more familiar to me, and Hamburg, the harbour and the streets of St. Pauli offered a colourful backdrop to the early part of the narrative. There was the Bernhard-Nocht-Strasse where Henrik lodges with Claudia (a psychotherapist), the Reeperbahn with its sex clubs, and a pub next to the harbour that I often frequented – called Kapitäns Eck (Captain’s Corner) – Hildegard’s Corner in the story. There was also the big Ferris wheel in the fairground, where Henrik meets his thuggish Stasi controller Barschke – a scene reminiscent of the one on the big wheel in Vienna in the film The Third Man. 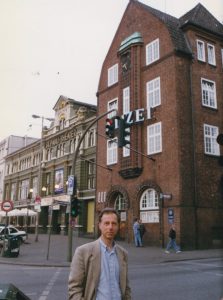 Hamburg scenes: (above) me (or possibly the spy in disguise) on the Reeperbahn by the famous police station, the Davidwache; (left) my drawing of the Antonistrasse where I lived in St. Pauli. These streets are the stamping ground of the spy, Henrik Erdmann, when he first arrives in Hamburg.

One of my favourite hostelries, the Käpitans Eck pub on the Fischmarkt (Hildegard’s Corner in the story) with its “singing landlady” where Henrik gets into a fight with a drunkard. Alas the pub has long since changed hands.

When to let cats out of bags

In the story as originally conceived, the reader would initially think that Henrik is simply a dissident who is going to the west to look for his mother, and only gradually would it be revealed that he is a spy. After we had written the first few chapters that way, it became clear that this failed to make the figure of Henrik interesting enough. So we decided that right at the start we would let the Stasi cat out of the bag. The next question was: Is he a reluctant spy, or does he genuinely believe in the cause he is serving? The former would make him more sympathetic and easier to identify with, but the latter would be more credible and would make him more interesting and allow for a change of heart later on. So in the very first few pages we reveal that he is a spy and – at least initially – a committed one.

After he has found his feet in Hamburg our spy sets off for the Danish island of Lysholm – a fictional place based on the island of Møn, which I had visited many times. There he locates the home of Birthe Karlsson and her family and, after a failed attempt, finally makes contact and is accepted by her and some, but not all, of her family. After an ill-fated love affair with his landlady in Hamburg, leading indirectly to her death, he moves to Lysholm and begins looking for ways to bring down Borup. The trouble is that he falls in love with Birthe’s daughter Kirsten, but cannot declare his love, as he believes her to be his half-sister. He must also conceal from the family that he is a spy. So he progressively becomes entangled in a web of lies, deception and danger. 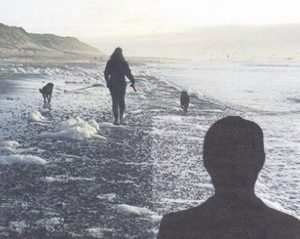 The bleak coast of a Danish island, and a spy’s forlorn love for a half-sister.

Meanwhile there is a parallel story of another ex-Lebensborn inmate living in East Berlin – let’s call him simply the Second Man. He is frustrated with his job as a plumber and unhappy in his marriage to a zealously communist wife, and he forms a daring plan to escape to the west by swimming across the river Elbe. It turns out that there is a fatal connection between the lives of the two men, which works itself out in a suspenseful way in the course of the narrative. 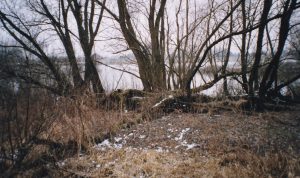 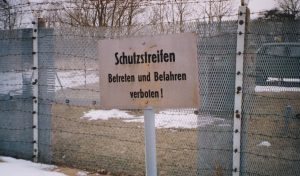 The east side of the river Elbe, looking over to West Germany – the spot where the Second Man sets out to swim across. This area was in a no-go zone, protected by fences like the one shown on the right, and patrolled by armed guards with fierce dogs.

Our characters, like wilful children, began to develop in interesting ways that we had not always anticipated: Birthe, the mother who still feels guilty for having given her son away, Sven her uncouth husband who is hostile to Henrik, their daughter Kirsten who begins to sense that Henrik has more than brotherly feelings towards her, Arnold Borup, the ruthless, golf-playing politician with a murky war background, and the Second Man, who is like a Damoclean sword waiting to drop on the unsuspecting spy.

Events move to an explosive climax and a cliff-hanger, which is only resolved after a lapse of time in the reunited Berlin of 1990. The final scene takes place in Copenhagen in an ending that appears happy but is overshadowed by a threat from the past that still hovers in the background.

Three years after the first edition, with Tim Jeal’s agreement, I substantially revised the text, designed a new cover and brought out a new edition under my own name and with a new title, The Lebensborn Spy. In revising the book it became clear to me that an important aspect of the story was the theme of the search for one’s ancestral roots and native homeland. In the new version I made this theme more explicit and gave it greater emphasis. The Lebensborn Spy is therefore not just an exciting Cold War thriller but a book that deals compellingly with a perennial theme that is today more intensively debated than ever.

“A gripping spy thriller that captures the time and places of its setting perfectly.” Amazon reader.

Exciting podcast interview with Christopher McIntosh about The Lebensborn Spy on http://www.spybrary.com/lebensborn-spy/